After a few return flights to Australia (have to love 96 hours on a plan.....) I've got our version of ADLG-R up to a point where it's playable and time to give it a go.

A few of my club mates are keen to give a go.

Game size is 200 points and we had around 19 elements worth on the table.
To represent pike & shot, I've modified the idea of a Mixed Unit.  So, a Pike & Shot unit fights as Heavy Foot Spear and shots a LMI Bow, but with a Musket.

The unit is 80mm wide, 40mm deep and fights like a War Wagon.  It allows for integral support and allows for some fun ideas.

To represent the Swedish "Salvo" tactic, I'm treating the Swedish Pike & Shot as having Impact with Furious charge vs Foot, but shoot with a minus.

The English horse are treated as Medium Knights but with no armour.

The Swedish horse are a combination of Medium Knights with Impact to Medium Cav with Carbine.

The Swedes win the initiative and invade England.  The English deploy a Water Way to limit the table and give them a secure flank.

The Swedish dragoons deploy to the right hiding in the field

On the left flank, the Swedish Hakkapeliita and Latta Ryttare
deploy with Carbine horse as support.

The English deploy several pike & shot units in the centre with eight units of horse, four on each side. 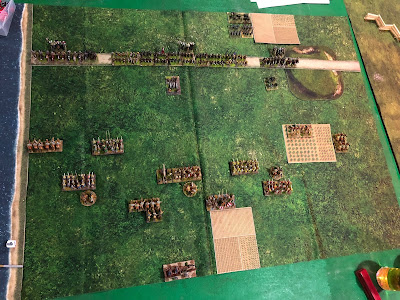 The Swedes advance.  I've added the idea of checker board movement for group movement. 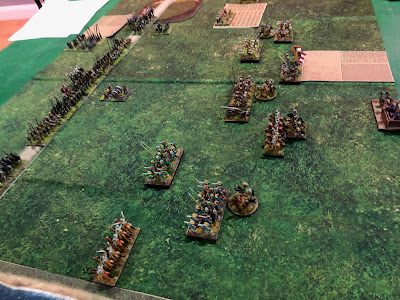 The English form up, bracing for the Swedes 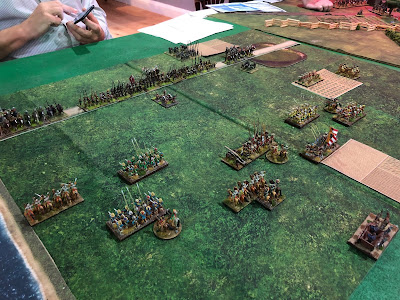 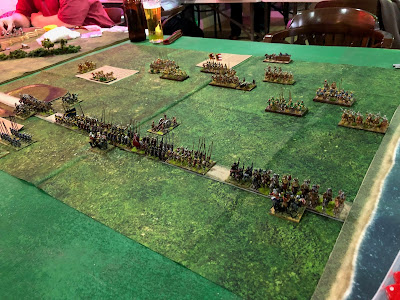 The Swedes make contact on the left flank.  The right flank is slowed down, trying to prevent the English horse from flanking them. 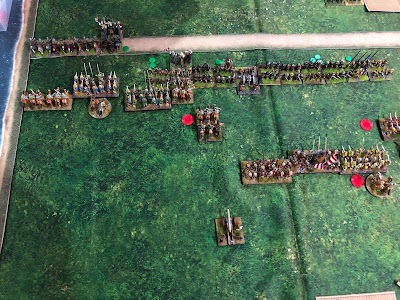 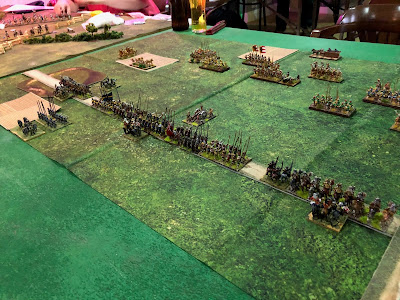 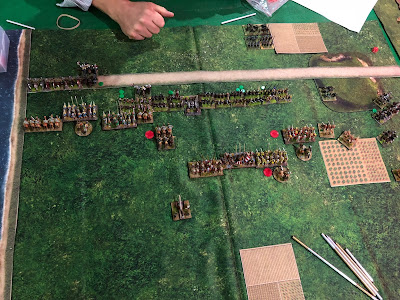 The lines clash together, both taking casualties.  The Swedish foot finally break thru. 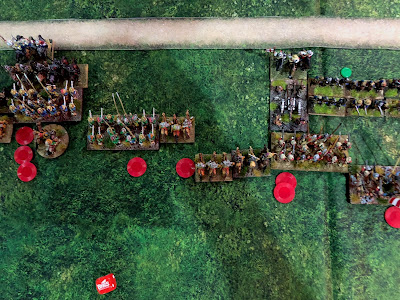 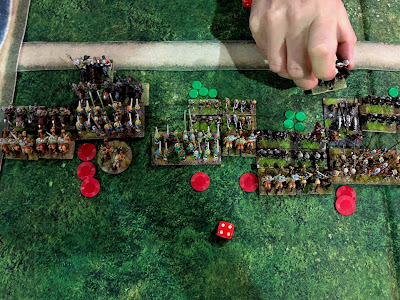 All in all, everything worked very nicely.  Time to get some more practice games in.

Posted by the.urban.bunny at 21:46 No comments:

The CLWC has really adopted ADLG as our choice set of rules for Ancients.

This has naturally lead us to think about adapting the rules to other periods.

A few of us are keen Renaissance players and have started modifying the rules to play in this period.

There have been a few versions of this rules posted on the ADLG forums and I've gone and used this as the basis to a writing a set of rules.

The basic idea is to use the ADLG rules as they are with the minimum tweaks to reflect the period.

I'm focusing the 30 Years war period as this is what the majority of my club mates have an army in.  The rules will cover from the Pike & Shotte up to the rise of the Bayonet, basically 1600 ish to the 1696.

I'm not worrying about including the Italian Wars as the ADLG rules can cover these.  I've played a lot of this period in FoGR and while very impressive looking, its a lot of "push me/shove you" and most games end up in a draw.

It's been fun to write these rules/expansion up and push some soldiers around on the table.
Posted by the.urban.bunny at 21:04 No comments: