I'm off to Roll Call this weekend and will be playing in the FoGR 25mm competition.

I'm bring Later Swedes to the comp, will be interesting to see how they go.  I've had fun with them in 15mm.

Its a small comp with lots of foot armies.  Will be interesting to see how the Swedes go against the Japanese.  I ran a 30 Years War French army last year against Paul's Japanese and got absolutely stonked.  Lets see if I can do better this year.

Posted by the.urban.bunny at 23:58 No comments: 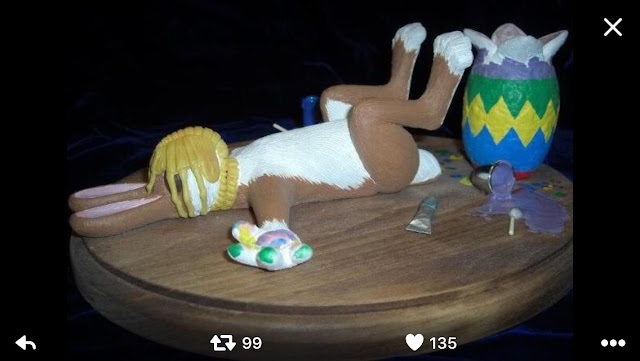 Posted by the.urban.bunny at 23:48 No comments:

Blucher one day event at Oxford


Alasdair from the Oxford club has been organising a series of one day events at his club.  The idea is to have a whole day to play one big game with lots of players.  I've done a couple of modern games with him and this was the first Blucher event.

We had 16 players on the day with the French attacking the allies.

It was quite impressive to have over 5000 troops on the table and a few newbies joining in.  The game ended up with a minor win to the French, having cleared out 1/2 the battle field of Austrians, Russians with the Prussians pinned down.

The table.  I was playing on the table closest to us.  I was a French Sub commander with the task of clearing out the table Austrians.  To my right, the French were against the Russians.

To my left, Paddy, the supreme commander (and we use the term loosely) had a few Prussian cores to deal with. 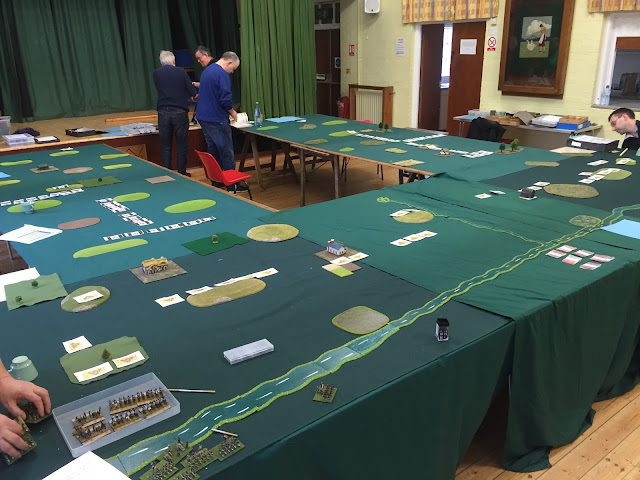 Interesting basing for Blucher.  Rather the FoGN basing of 32 inf per base, Paddy has gone for 12 figures and a general.  It still looked rather good and makes a new army a lot cheaper. 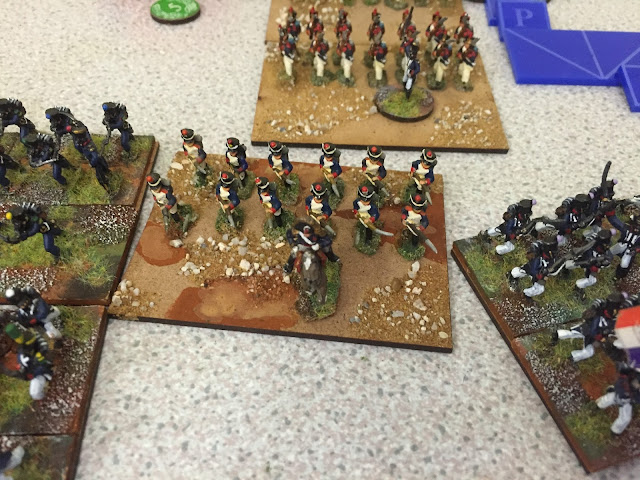 Paddy has been busy basing up lots of spare units for Blucher. 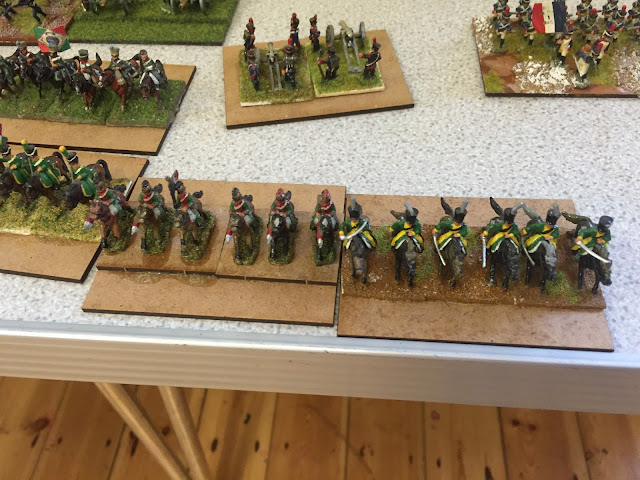 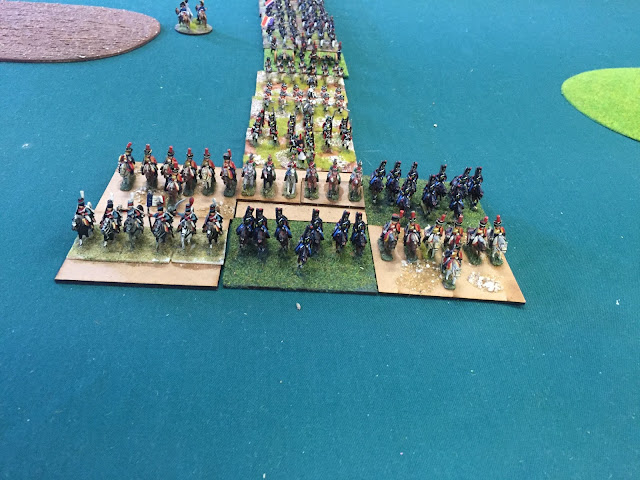 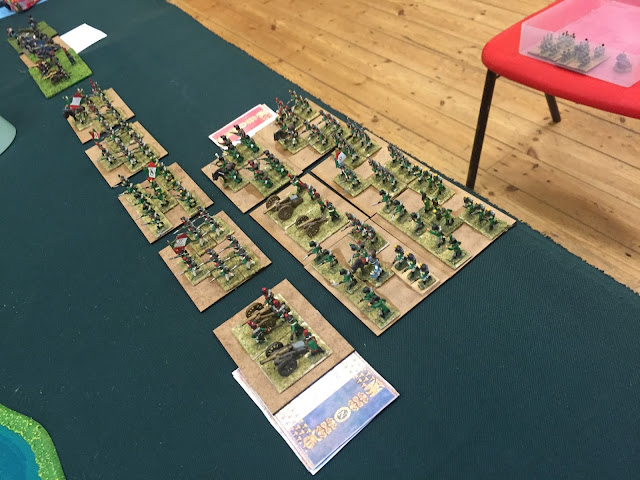 Paddy realises that he needs to hold back the Prussians as multiple divisions advance. 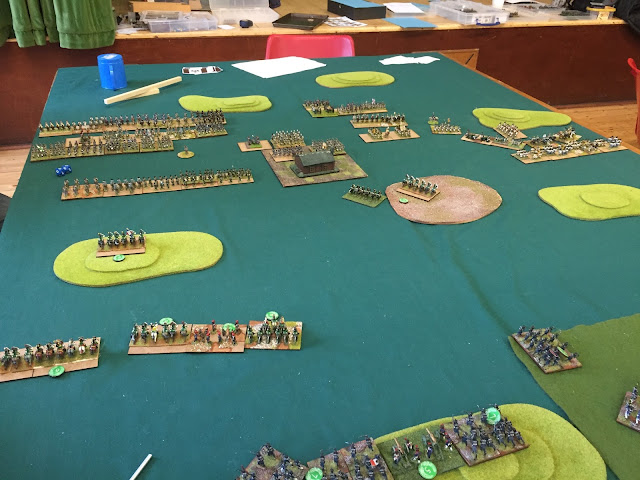 Brian and I get stuck in, a solid line of Austrian infantry and cav advance on my French.  Quite a few of my units are already damaged by some very good artillery shooting. 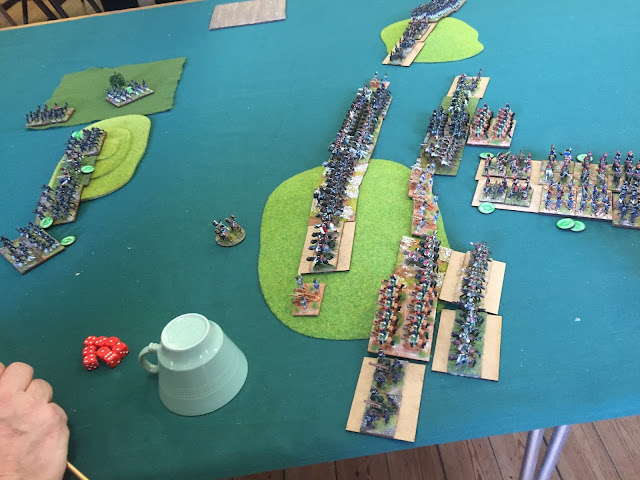 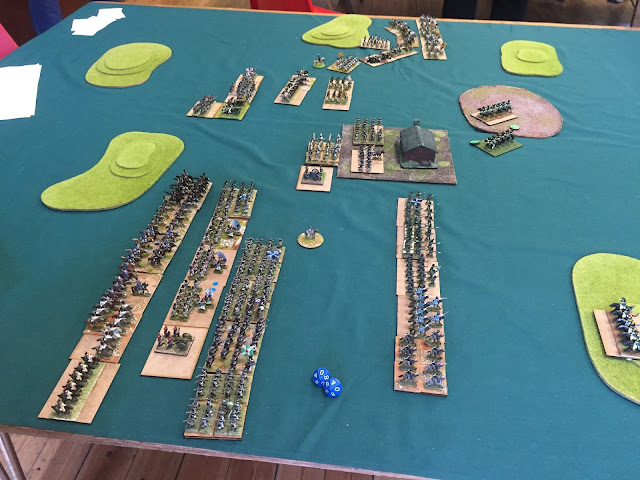 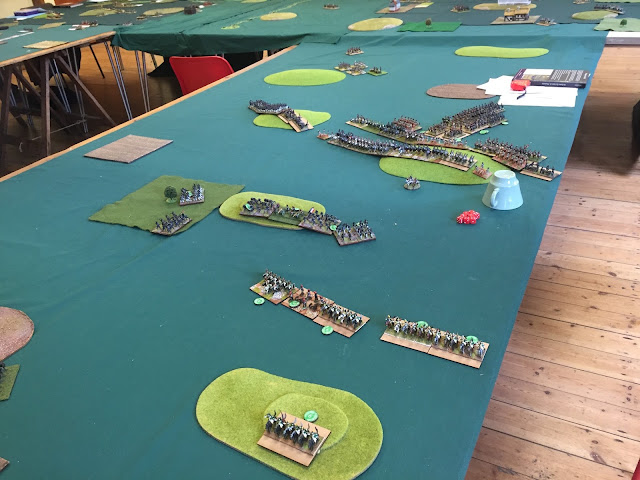 My French Veterans finally clear the river and advance on the Austrian infantry. 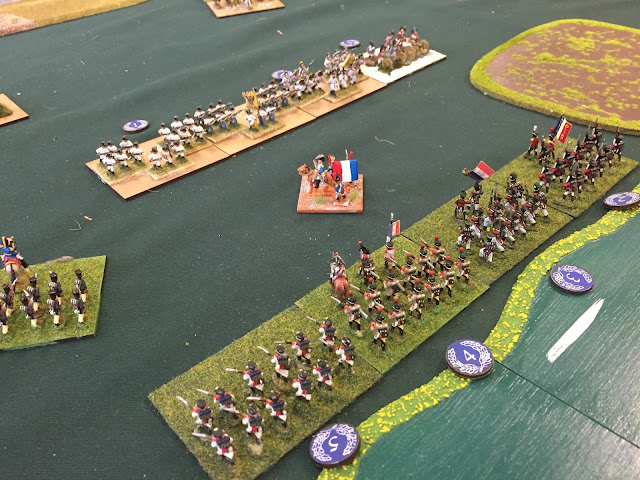 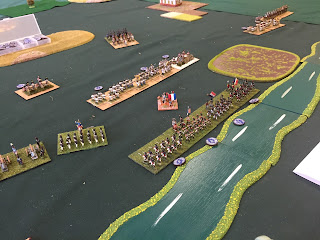 My French having cleared out the left flank move to clear out the last of the Austrians.  Little did we know that Russian reinforcements were to arrive shortly afterwards. 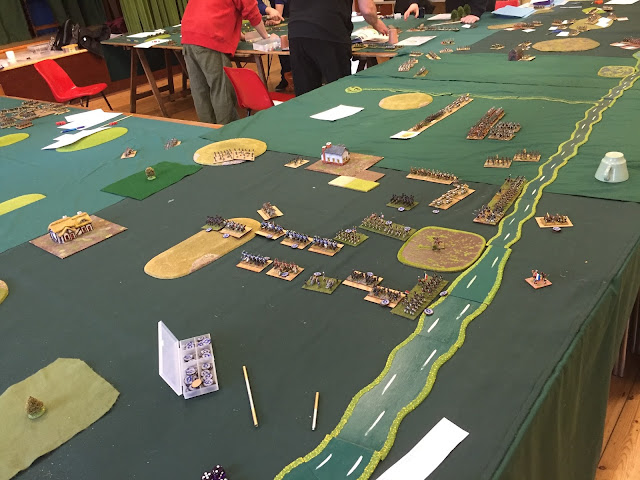 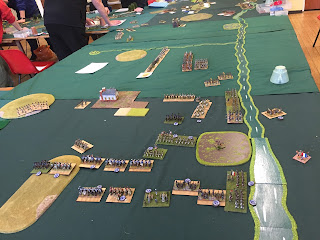 My battered French cav move to engage the Russian reinforcements, discovering Russian artillery is quite good. 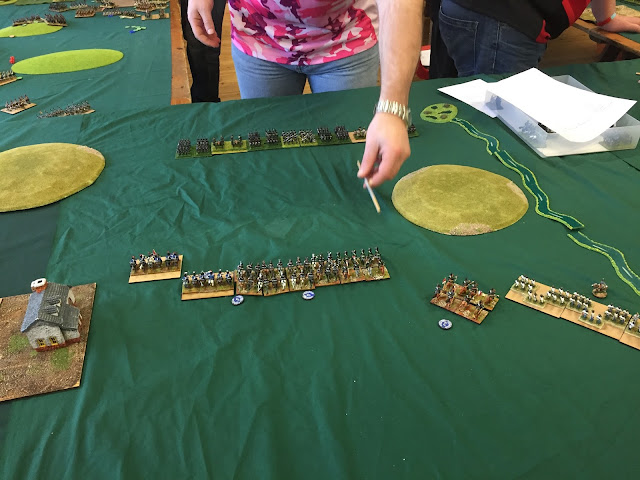 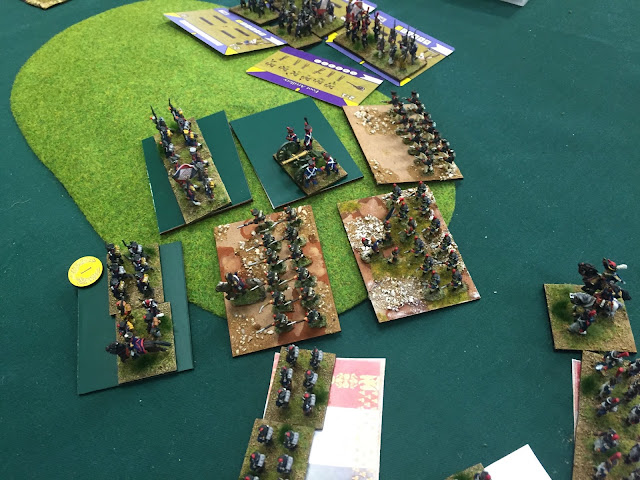 Brian's Russians and what remains of the Austrians engage my French.

We discovered that prepared infantry can hold off mounted for quite a while. 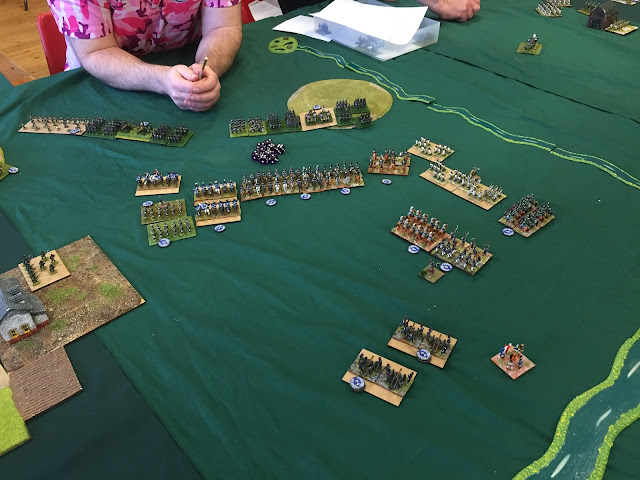 On the far left flank, my remaining infantry pushed off the Austrian conscripts and advance on the Russians. 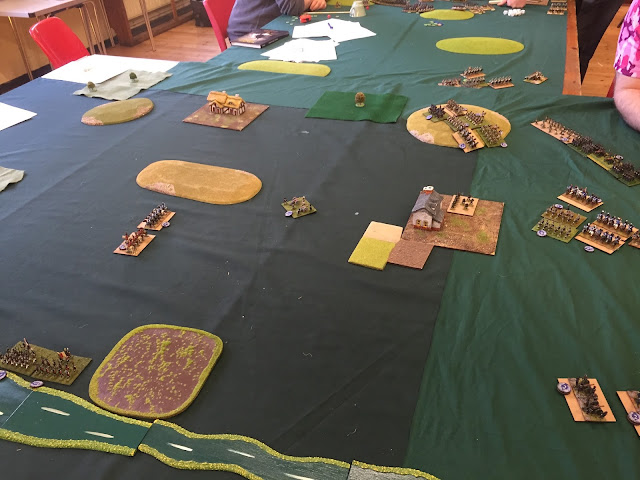 Posted by the.urban.bunny at 10:45 No comments:

I'm quite enjoying the Blucher rules.  They are straight forward, play well and have enough detail to allow some evil.

Adam and I had a game recently, with both of us fielding 1809 French armies.  Adam went for a different flavour of French, with lots of Poles, Italians and Swiss troops.

We didn't use the Scharnhorst campaign system, since both of us are still learning the rules, so we deployed the traditional style.

The game ended up a draw with both of us breaking in the same turn, lots of units broke in one turn.

I was the attacker and moved first.  Charge! 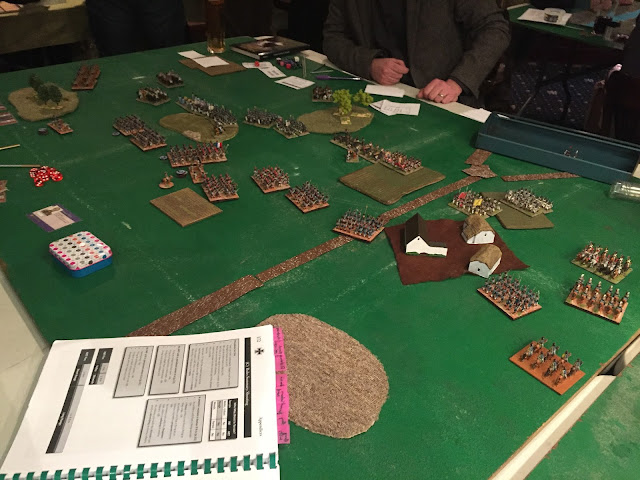 The French Dragoons supported by infantry advance on the flanks, with just a cav unit trying to slow them down. 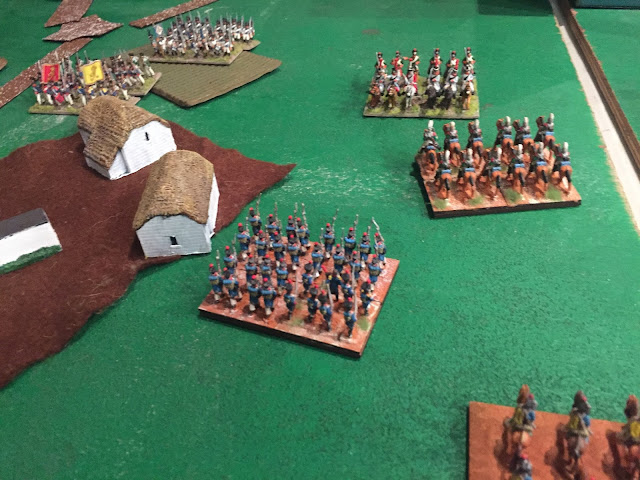 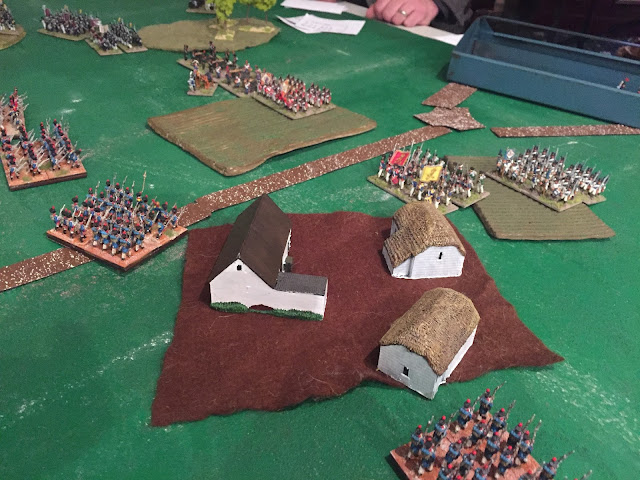 Adam's Polish shock troops come over the hill, very keen for a fight. 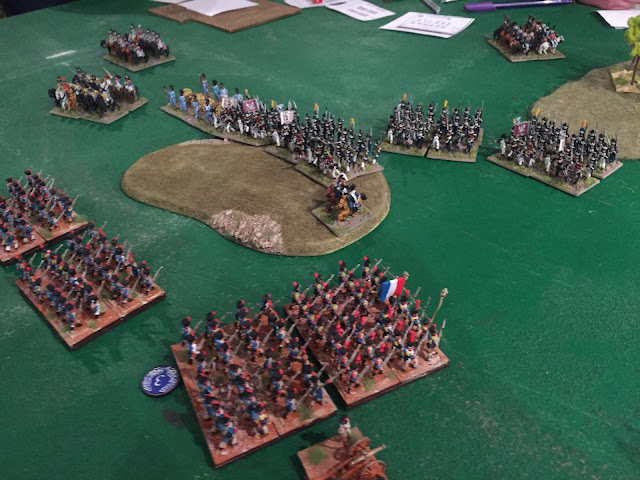 Adam's Polish Cuirassiers appear on my flank, causing quite a lot of damage 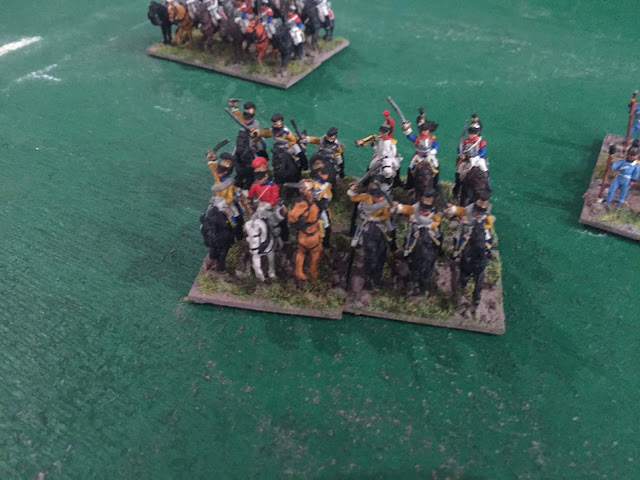 The Polish Cuirassiers debating wether to charge my Dragoons on the flank. I charged later on and it didn't go well. 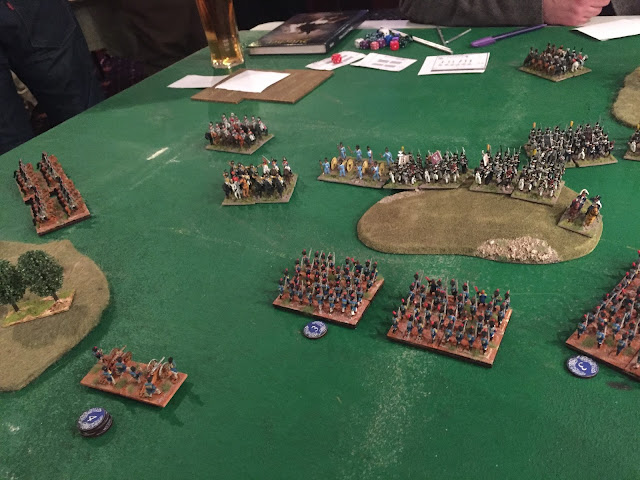 Posted by the.urban.bunny at 10:08 No comments: