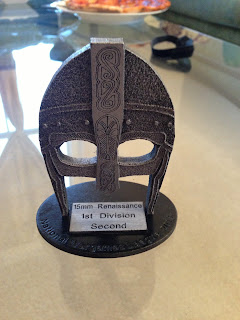 My results were pretty good, I only lost my army once, but that was against Alisdar, so, it was going to happen.  I managed to get 8 points off of him, so, have to be happy with that.

here is who I fought and the result

Five very good games, very tough, and well fought.  With each round only being three hours, you have to get stuck in and go for it.

Off to Campaign this weekend for another FoGR competition.

The runners and riders have now been posted.

I'm looking forward to the comp.  Campaign is always a lot of fun since its a themed comp and the periods are very tight with no clear choice of killer army.

Posted by the.urban.bunny at 19:57 No comments: