I can just see me buying a few of these. I do like the 15mm range and I really want to get some moderns.

I going to base these up using Flames of War bases and going to use them with Ambush Alley and Cold War Commander.
Posted by the.urban.bunny at 15:49 No comments:

Had a game with one of the guys from the club where we played Red Guard vs Red Guard. It was an intro game just to show off the rules to the guys at the club.


Green Team advancing on the BUA 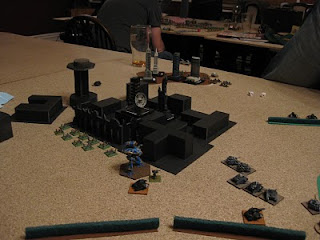 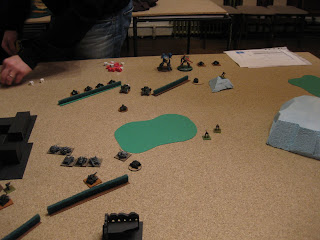 Posted by the.urban.bunny at 15:37 No comments:

Having gotten into 15mm, I've been on the lookout for 15mm vendors. I found this one who has options for Scifi, Zombies and moderns.

Link to their site
Posted by the.urban.bunny at 15:35 No comments:

Well, with 15mm having bitten me big time, how could you not go for a few zombies? I love a good zombie movie and I've picked up a bunch of zombie starter packs from Rebel Mins. In a few weeks, I'm going to be the proud owner of some 60 15mm zombie figures.

I picked up the rules for Ambush Z, from the vendors of Ambush Alley. They are rules for skirmish games in 15mm and have options for solo play. They look good.

the rules seem to be more scenario based rather than just straight army battles. Time to watch some of George Romeo's zombie movies and get some ideas.

Well, I have the 15mm bug big time. I've gone and bought Ambush Alley to be able to play some small skirmish games in 15mm. The rules look good and you don't need to have too many figures to play a game. I found a vendor called Rebel Minis who do a starter pack for Ambush Alley. For $25, you get a bunch of masked terrorists/militia and a 12 or so special force troops. I've got some on order and they should be here in a few weeks.

A couple of nice things about the rules is that you can play them solo and the table size is either only 2x2 or 4x4 so, I can play it home and practice.

Looking forward to playing the rules. Gives me an excuse to go hunt down 15mm figures, helicopters and vehicles. I can see a few conversions coming up involving Toyata Hilux trucks and machine guns.

Link to the rules
Posted by the.urban.bunny at 15:24 No comments: