I got to bring out my FWC bug and Red Guard army to the club at the Perservance for the first time and they looked good.

The bugs got chewed up pretty heavily. The Red Guard's artillery was accurate and extremely effective. I lost almost all of my light infantry to the artillery. The big bugs did what they are grown for. They went in close and tore things to shreds, but it didn't help them. The Red Guard held it's ground and just kept shooting until every bug was dealt with.


The Bug Army being chased by the bugs 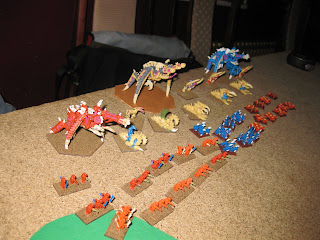 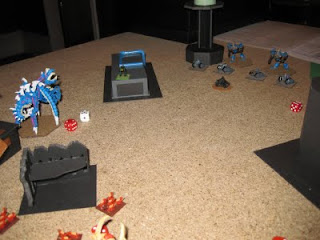 Posted by the.urban.bunny at 21:58 No comments:

So, four battles, two loses and two wins. Playing a skimisher army compared to a heavy foot army is very different and comes with a few gotchas. Two things, armoured troops and mass shooty troops are not your friend.

Also, if you are going to take photos, don't drink too many Italian espressos. All of my photos are somewhat blurred......

Well, a big shooty army is not something that I really want to run up against again. Poor skirmishers are no match vs battlegroups of 8 crossbows or long bows. I should have run my knights against his bow rather than going for a one on one fight with his knights.

I can't remember who I was playing in this game, but, I was beaten solidly. At the end, I had my baggage sacked and lost the game. The game was very fluid with both armies sacking each others's baggage, fleeing units off the table and moving from playing long edge of the table to playing short edge of the table.

My first big win. I ran up against what I think was a Scots army with two allies and was able to dance around them and slowly pick holes in his line until my knights arrived en force and did and what knights do best.

This was a hard fought battle. The Later Polish army is almost the same as my hungarians and it was a hard fought battle. In the end, I managed to sack his baggage and rout his knights plus kill two of his three generals. The battle didn't start all that well with my opponent announcing that he had a flank march and that it was going to arrive on turn 1! Lucky for me, the flank march was only one battle group and didn't interfer in the battle. The fighting revolved around our knights and his horse skirmishers vs my foot skirmishers.
Posted by the.urban.bunny at 21:32 No comments:

Woot! Two wins and two loses! The Middle Hungarians had their debut at the FoG competition in Milan and worked well. I had four games over the two days and they were really good games. There was much haggling in Italian, coffee and Moretti beer on hand, so, how could it go wrong?

One thing to note, poor troops are not combat troops. Since they break once they have lost 33% of their battle group, keep them away from mounted. My poor foot skirmishers got ridden over on more than one occasion as they got caught in the open by light horse. It wasn't pretty.

Looks like 15mm is the way to go these days. I reckon that a bunch of these would look really good. Would be fun to try recreate some of the zombie movies on a battle field.

World War Z anyone?
Posted by the.urban.bunny at 09:55 No comments: