Geoff gave me a run of the Blucher rules a few weeks ago and I was well impressed with the rules.
We managed to get a convincing result (I lost), but it seemed to work and not too much rules checking.
I brought my 1815 French and Geoff had his Prussians.
Geoff won the initative and the mini campaign (I had no idea what to do) and the table was set up very differently to the usual line up and charge.  Troops deploy hidden on the table, all you can see is their card, which gives you an idea that someone is there, but not what.
Geoff's troops had the nice shiney cards, mine are the plain white ones.  I managed to deploy with one column to my right, centre and in Geoff's centre.
I'm going to give this game a lot more focus in 2016, I like that it's not just a classic line up and shoot and it plays well.  It gives you a feel of the period without being too "Napoleonicy", ie anal retentive.....
I've got some more troops in the cupboard and will paint them up over Xmas.  I'm going to base them up for Blucher, but use the FoGN sizing, so, will be 80mm wide by 60mm deep, all on one movement square.  Much easier to move. 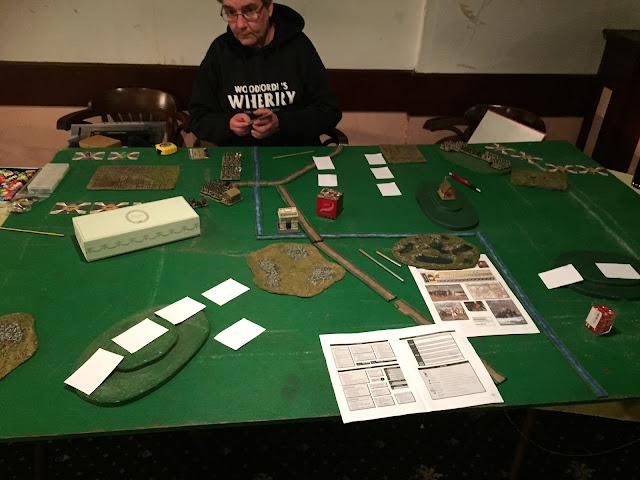 Geoff's troops move and take the village.  My Arc de Triomphe looks on..... 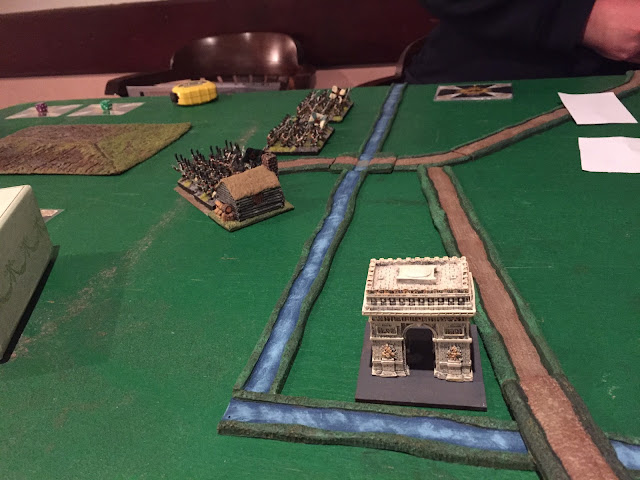 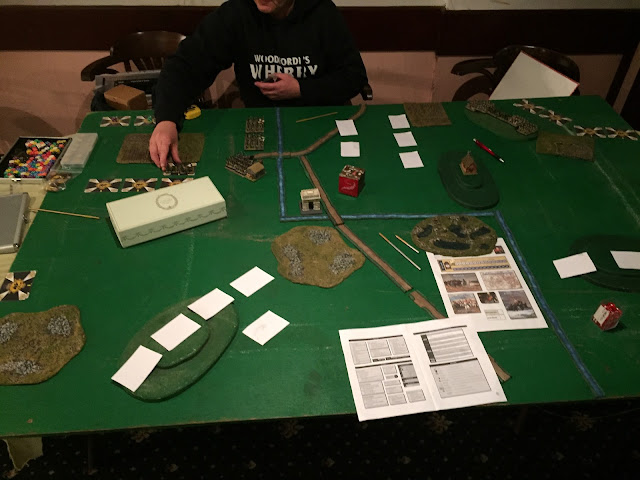 Geoff and I start pushing one Geoff's left flank, my Old Guard and up for a fight and ignoring the thrashing I'm getting on the other side of the table. 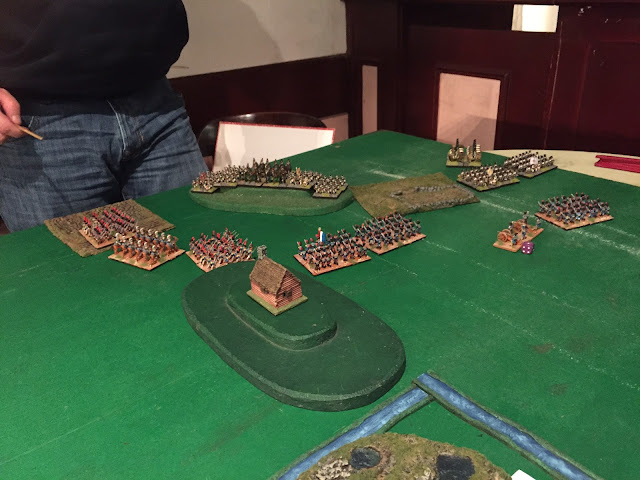 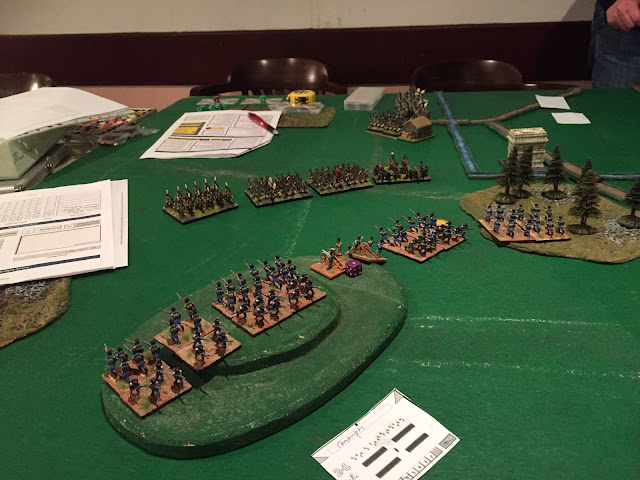 The old guard move in, taking fire as they advance 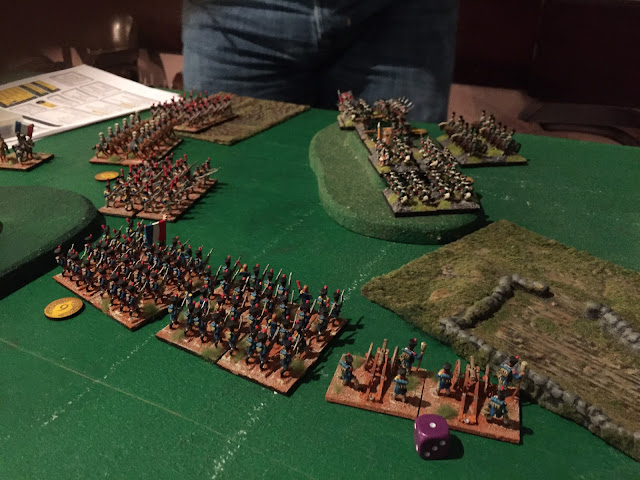 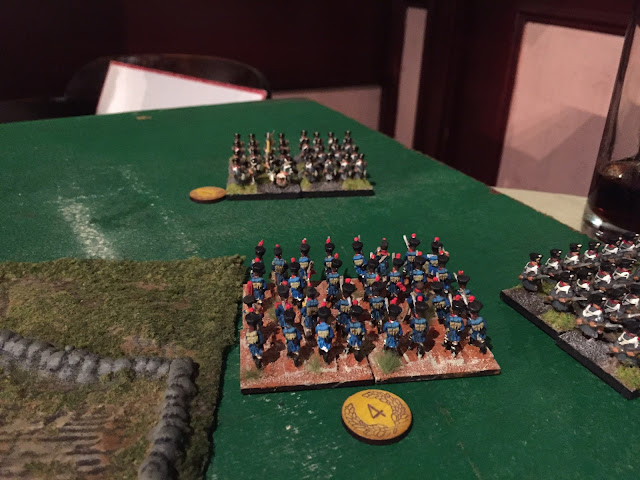 Hmm, that breakthrough didn't last long, got charged in the flank and my troops running over the hill got beaten pretty heavily. 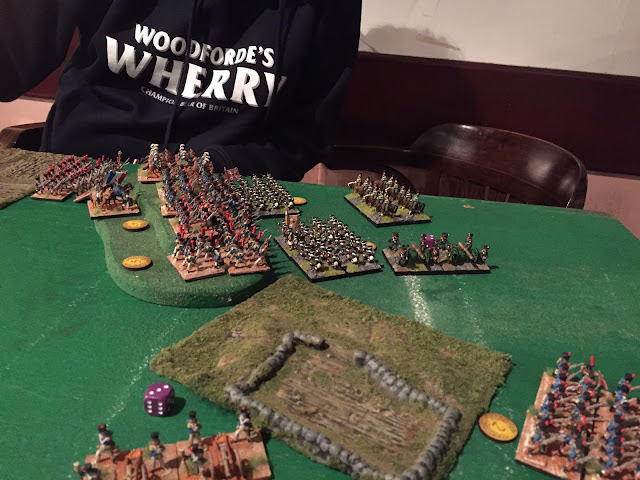 All over except for the shouting 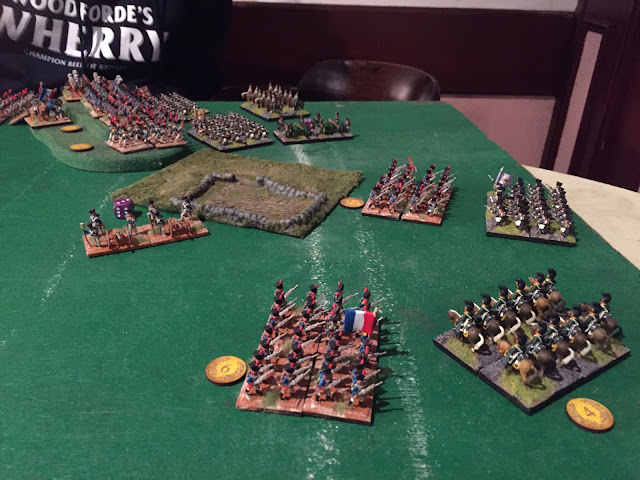 Posted by the.urban.bunny at 14:33 No comments:

I know they are not in their proper uniform, but I like the colours and it makes it obvious to me who is superior/average on the table (red = superior, blue = average)

I decided to not go for the standard, historical flag, but use the albums of one of my favourite Swedish heavy metal bands, Sabaton, who have an album about Gustavus Adolphus .

The army was fun to play with, you don't get as much shooting as other armies, but as soon as you can, you charge hoping the Salvo effect will disrupt/fragment the opponents.

One of the Generals 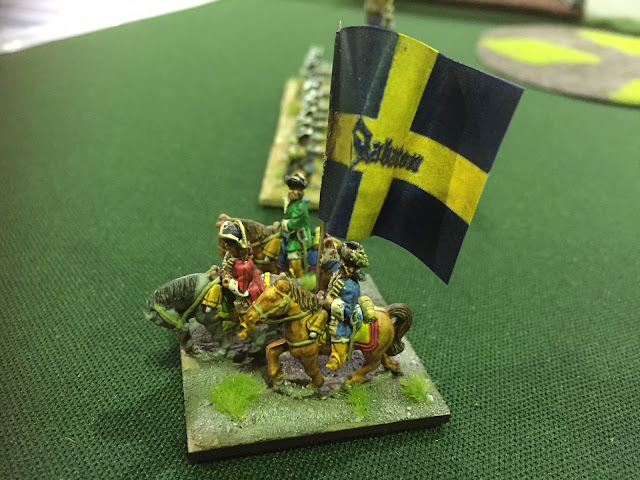 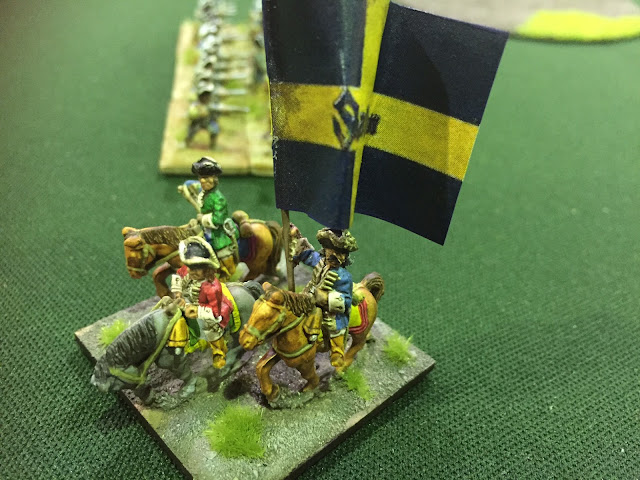 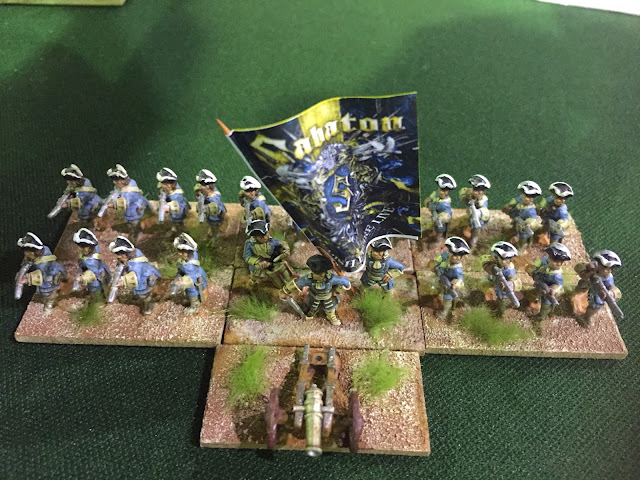 A line of superior salvo, supported by superior horse with a general pushing them along.

The foot's banner is from the album, Carolus Rex, which is about the Swedes. 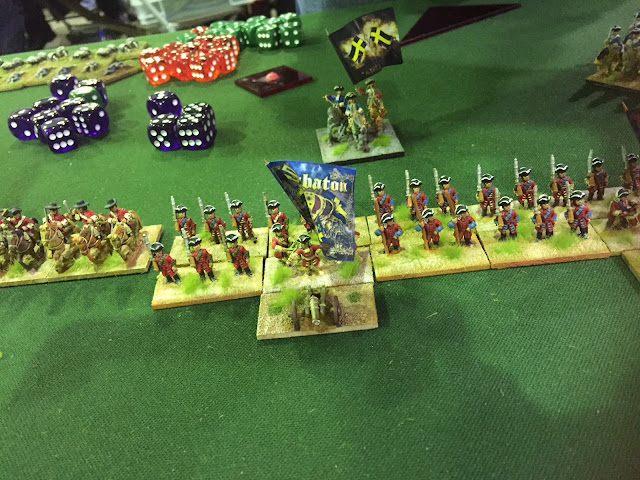 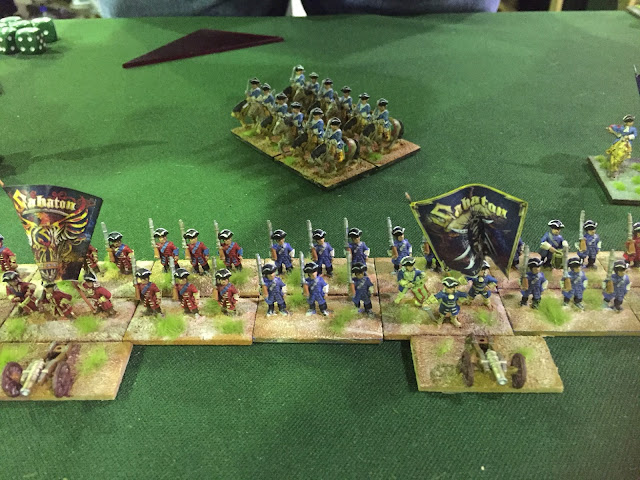 The army all packed up 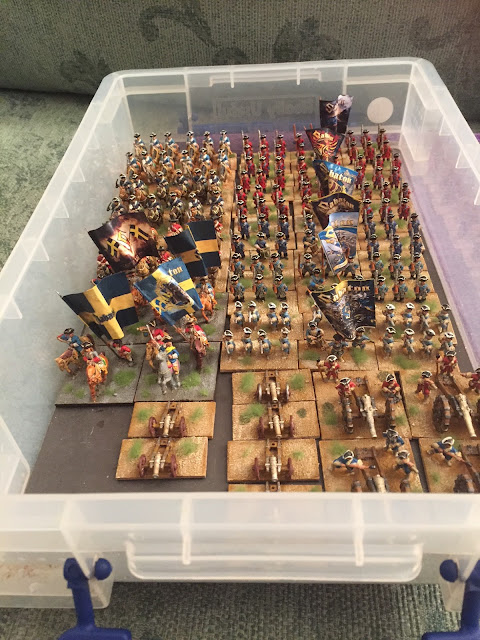 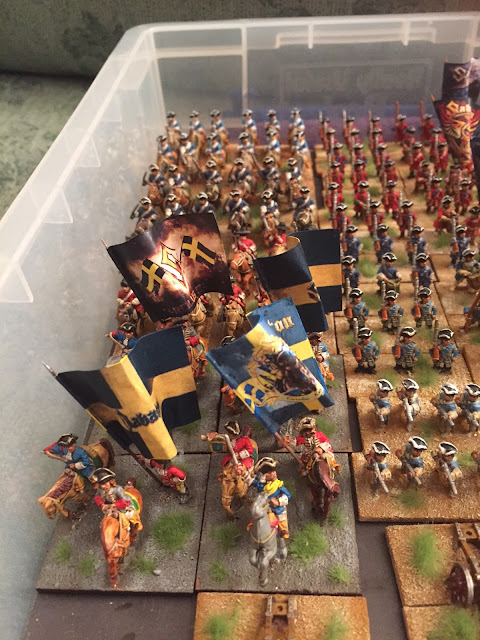 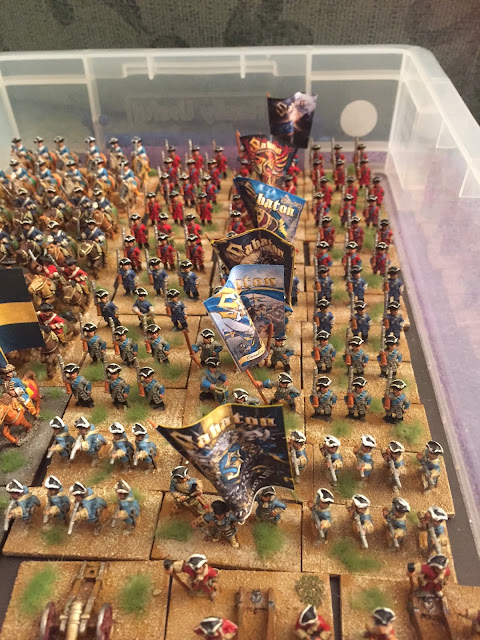 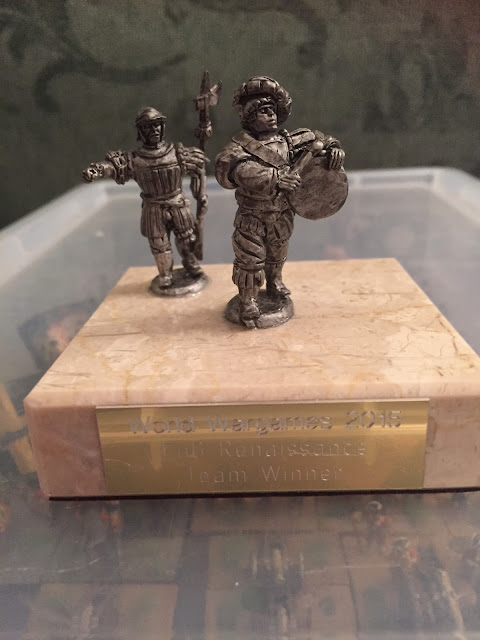 We decided to do it in style, winning by .23 of a point, now that was a close game.

It was won by the Porter, who in the final phase of the last game, killed a general, causing the unit it was attached to, to go fragmented.

It was a lot of fun bringing out the swedes, I ended up 2nd place in my pool, a few points behind Don with his League of Ausburg.
Posted by the.urban.bunny at 10:29 2 comments: