One of the guys in the club is getting into Force on Force with me and has a large collection of 20mm figures. So, you know what happened next..... trolling ebay, I found some 20mm plastics and painted them up.

When I was up at Derby a few weeks ago, I picked up some more 20mm figures from the Bring and Buy, so, I reckon I got enough for the next little while. I can now do US, British and "Insurgents". Can't do any arabic insurgents, mine are all european.

20mm looks really good for Force on Force with the figures on individual bases.

I'm going to go back and rebase my 15mm figures using the Flames of War bases as I prefer the 15mm figures on FoW bases.

Need to do my heavy weapons as a priority as they look terrible. You can't spot them out, they look like the rest.
Posted by the.urban.bunny at 22:15 No comments:

A couple of weekends ago I went down to the South East London Wargames Group's show called SELWG. It's a one day trade and show event held down in Crystal Palace.

It's a great vendor show, lots of vendors who don't go to many of the smaller comps. They also have lots of great demo games in a variety of periods.

One that caught my eye was an Israeli vs Lebanon gaming being played in 10mm using Cold War Commander. 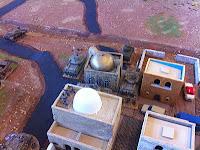 Another game I saw was a Vietnam gaming in I think 15mm. They had a 15mm Chinook on the table 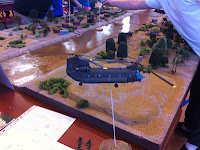 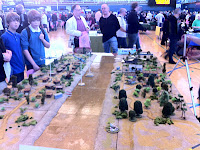 This was a 15mm WWII game set in a Polish city

Posted by the.urban.bunny at 21:53 No comments:

With the release of Tomorrow's War, I finally got the motivation to finish my 15mm grav tank that I bought at Warfare last year.

It's from Critical Mass Miniatures

Photos of the tank 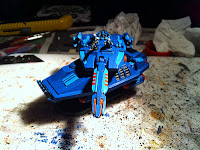 Posted by the.urban.bunny at 21:32 No comments:

The full version of Tomorrows War has finally been released to the masses.

Picked up my copy a few days ago and hoping to get a full of the club into it.

Time to finish off my 15mm sci fi figures.
Posted by the.urban.bunny at 21:19 No comments:

only a couple of weeks till the final wargaming comp for me for the year. I'm off to Reading to play in Warfare's FoGR comp. Looks like the FoGR comp could be bigger than the FoGAM comp, so, WOOT!

Let's see if I've learnt anything from the last few comps.....

here's hoping!
Posted by the.urban.bunny at 21:16 No comments:

Had a good comp with very good opponents and no rules lawering. Got frustrated with just having 12 bgs. You need to have at least 14, if you aren't that great a player.

Where is my Renaissance army....

Final game and a big win. Had a civil war facing another Anglo-Norman army.

My opponent suffered from a catastrophic meele round which saw his centre disappear in one turn due a unit breaking. It cause another three units to break.

And I got flushed! Ran up against an Andalusian army that rolled me. Couldn't win a close combat to save my life and went down in the final bound. All my spear needed to do was hold on and by routing, broke the army.

Facing an army with four more battle groups than you is hard work.

Well, I got put bakc in my box. Just got thrashed with a 1-24 result. Was playing against an Irish army. Lots of medium foot running around and I rolled some crud dice. My opponenet was kind enough to use this to his advantage and pick me to pieces.

Woot! Got a big win. Hopefully it won't be my only win for the comp.


I played a Feudal Castilian arm with my Anglo Normans. Got lucky early in the game and managed to break thru one flank.