Dave and I had our first game of ADLG-R and it wasn't bad.

Dave brought Early Swedes and I brought my trusty Germans.  The Germans ended the game victorious and a bunch of questions came out of the game.

I had my troops double based, so, pike and shot were 80mm wide, where as Dave was using his old FoGR bases, so, everything was 40mm wide.

The Germans won the initiative and attacked. I had the early tercio (just because I painted it)  and advanced toward the swedes. 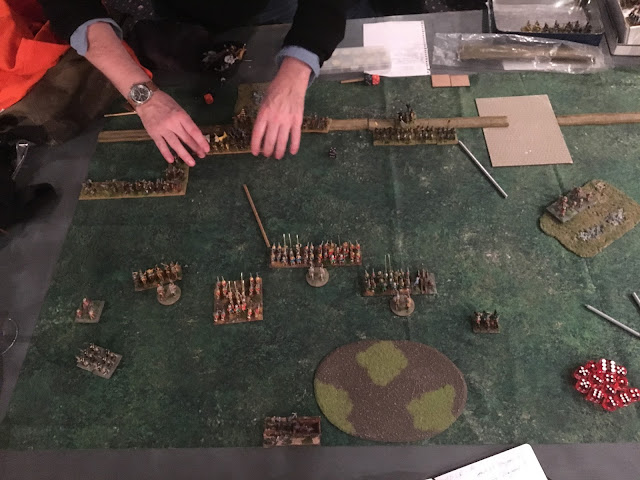 The Germans get into firing range.  Our pub/club doesn't have the best of lighting...... 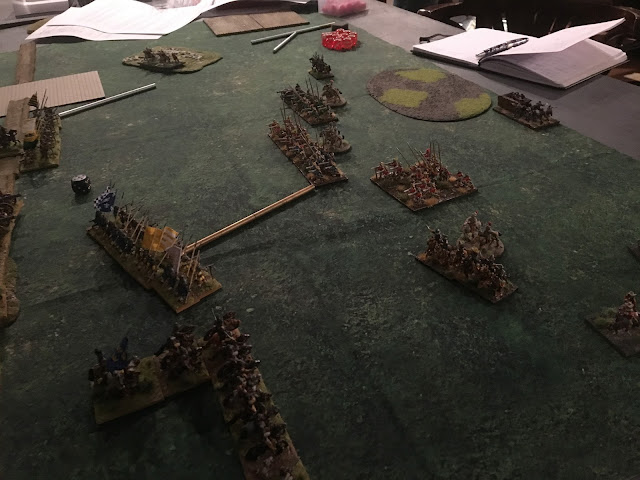 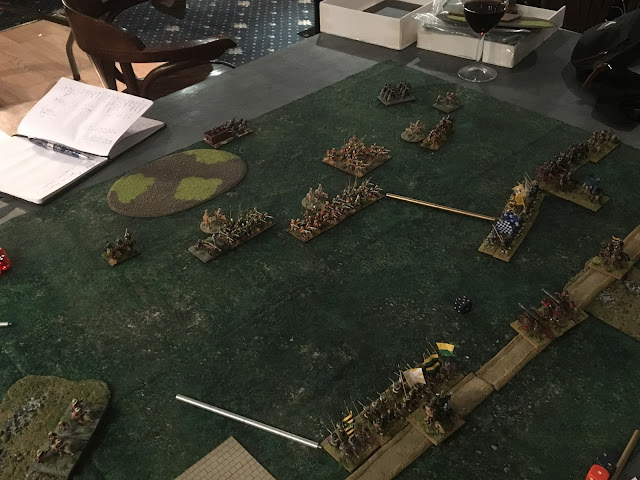 A few turns later.  As nearly everyone has a gun, just about every base has at least a cohesion marker. Posted by the.urban.bunny at 00:42 No comments:

The CLWC has been bitten hard by the ALDG bug and we've been really enjoying it.

As I've been playing it, my mind has been thinking, "Could this work for Renaissance?"

A bit of digging around and I found a beta version of the ADLG-R rules, basically a seven page expansion to the ADLG rules.

So, last night we gave them a run.

Overall, for a beta, they worked very well.  We got the same feel of "renaissance" we got from FoGR, but using the ADLG mechanics.

One of the debates with the beta rules is how to represent pike and shot units.

In FoGR, they are represented by four bases of musket and two pike bases.

As ADLG is an element game, how do you do this?

one suggestion is to have a single base, 1/2 spear, 1/2 musket, treat the unit as a mixed unit.

The other one, is to combine two bases together, giving you an 80mm wide by 40mm deep base that moves as one unit.

I couldn't resist, Museum Miniatures had a sale on.... 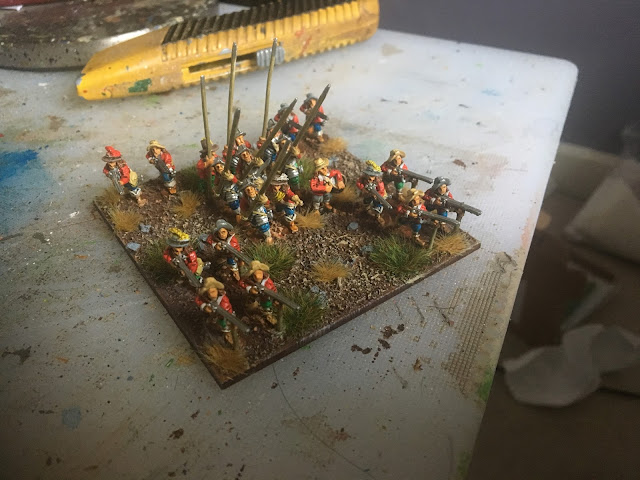 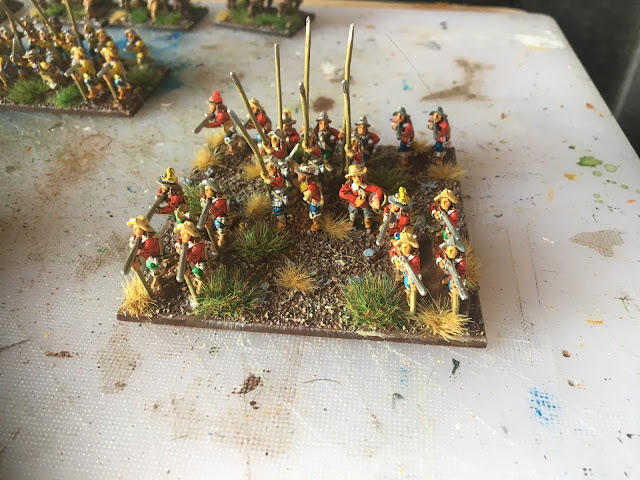 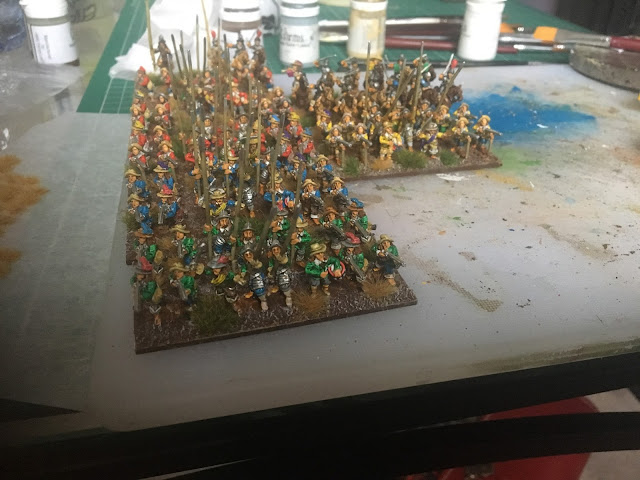 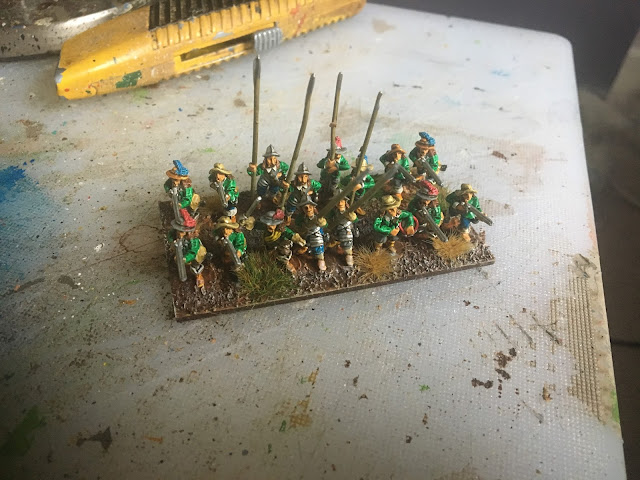 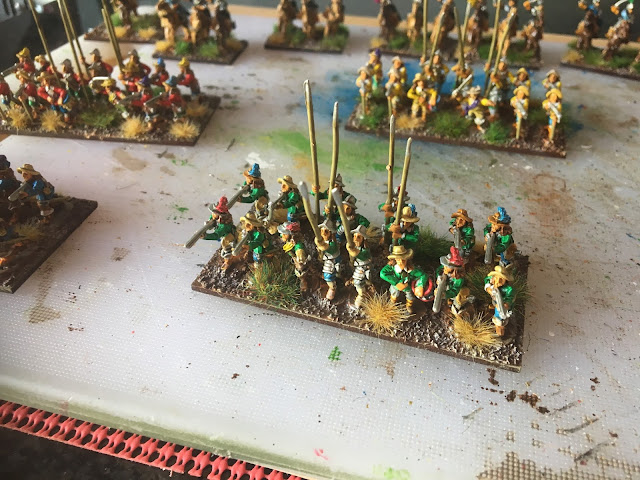 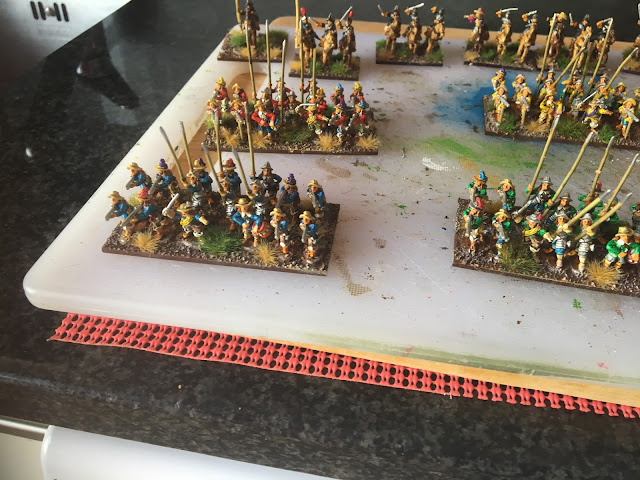 Posted by the.urban.bunny at 00:33 No comments:

I'm going to be taking most of 2017 off from FoGR and give ADLG a good run.

After Britcon last year I was becoming very jaded/bored with FoGR and over a few pints was chatting with my club mates.  I hadn't realised I'd been playing FoGR at over 8 comps a year for the last five years, plus club games.

I've been participating in the FoGR v2 forum a bit, but work has been pretty full on for the last six months,  which hasn't left much time to play of the forums.  I'd rather spend time at the club than on the computer.

Posted by the.urban.bunny at 23:51 No comments:

The CLWC has really adopted ADLG as our main set of ancient rules, with games like DBMM and FOGAM having basically died off.

The rules allow for a lot of granularity with different weapon types and armour.  This naturally made me start to think about how this would go with a renaissance army, so, I went looking.

I found on the ADLG forum a beta of ADLG-R.  It's a five page expansion to the core rules which covers up to the rise of the bayonet, so, around 1699 ish.

ADLG is a single element based game, so, one of the big questions is how do you represent pike and shot units?

ADLG-R has two options, retain single elements or, go for double based elements.

The double based elements allows you to visually represent a larger foot unit, like a tercio or pike and shot unit and give it the integral support the pike provides the shot.

So, I've gone and about some new foot and based up five pike and shot units and one early tercio.

The CLWC mob put on a one day Medieval ADLG comp which was a lot of fun.

I couldn't device what to bring so I went with my default option, Medieval Germans.

ADLG makes heavy foot like pike and spear actually worth while using by giving them one more cohesion point than mounted and medium foot.  This allows them to properly pick a fight and actually stay around for a while.

The Runners & Riders.
18 players and only a few double ups.  Interesting to see armies like Condottieri Italian, Scandinavian and Scots, not something you usually see. 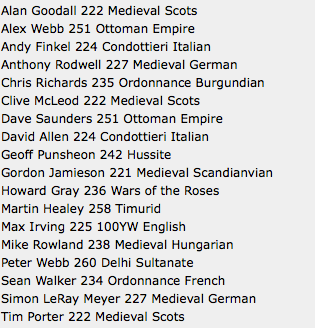 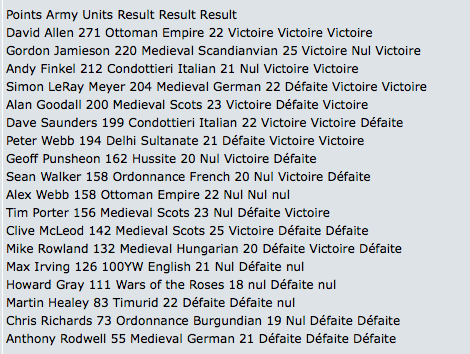 Posted by the.urban.bunny at 23:29 No comments: