Another game of ADLG-R during lock down.

This time, I've gone for two of the later armies, dating around 1680s.  I chose Later Poles vs League of Ausburg, so, two very different choices.  The LoAs power is high volume of shooting where as the Poles are very mounted focused, with the Winged Hussars as their central punch.

The table is a bit shorter as I'm using my coffee table rather than sitting on the floor.  So, I shorted the deployment which kept the rest of the table the same dimensions.

The end result was a convincing win to the Poles as they broke thru both flanks with their mounted wings, with the German and Polish mounted charging down the right flank of the LoA.

The Poles won the initiative and chose to attack in the forest.

The LoA deployed a water way and a village ( I used a star fort I bought at Warfare 2018) on one flank and their forest was moved over to the Polish side.  The Poles only deployed a road and a brush, which was removed. 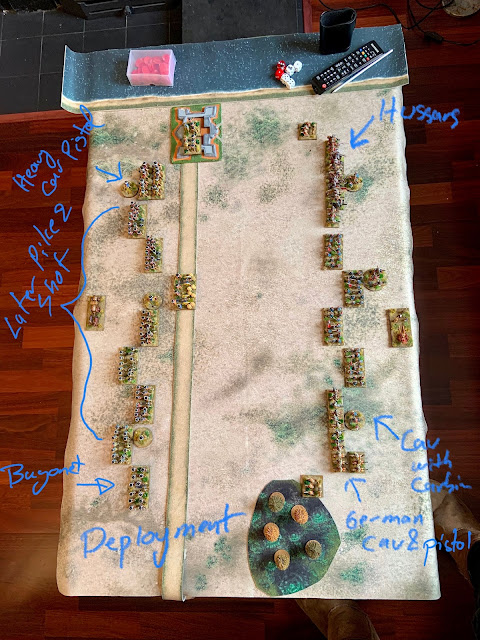 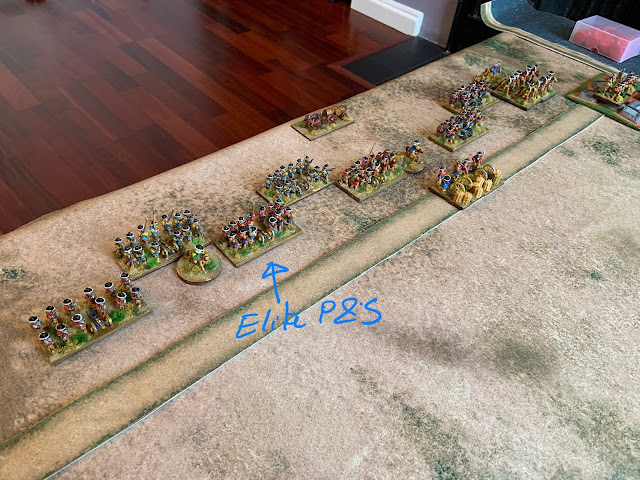 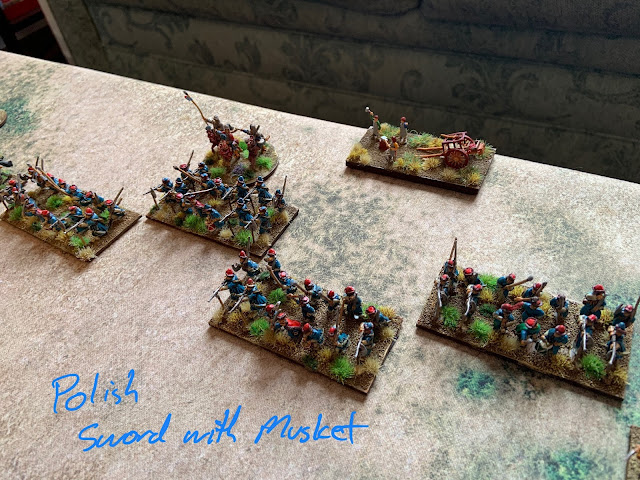 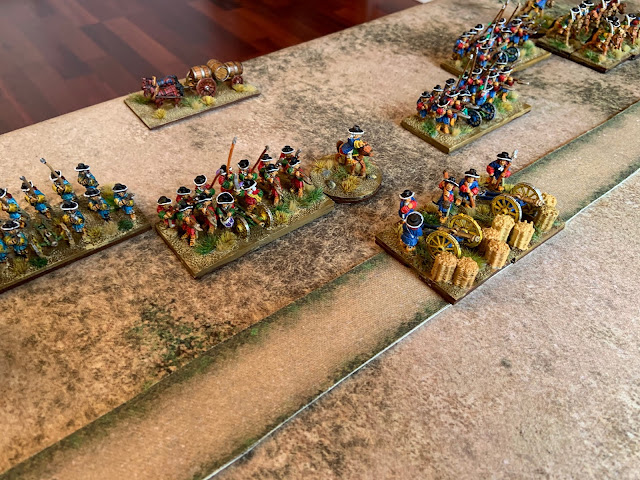 They loose both rounds of shooting, taking heavy fire from the LoA. 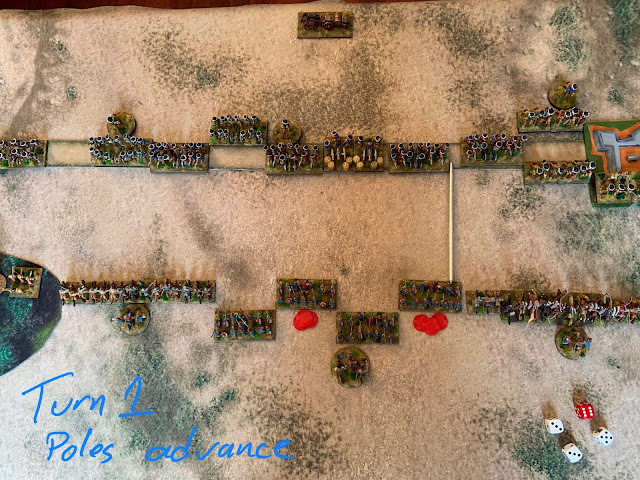 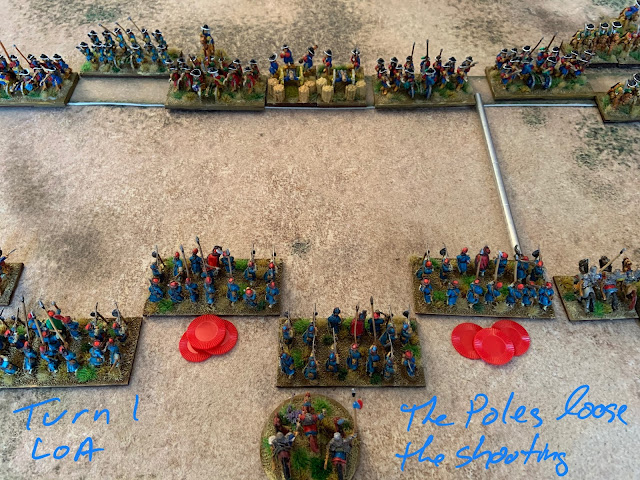 Turn 2
The Polish C n C moves to rally one of the Polish Foot that had three markers. 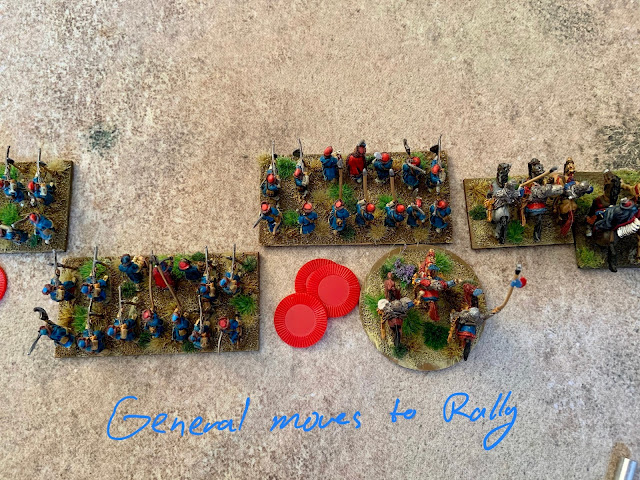 The roll is a 4 on the dice, so, with Rear Support and the General attached, a +2 is added to the dice.  The result is 2 more than required and so, two markers are removed. 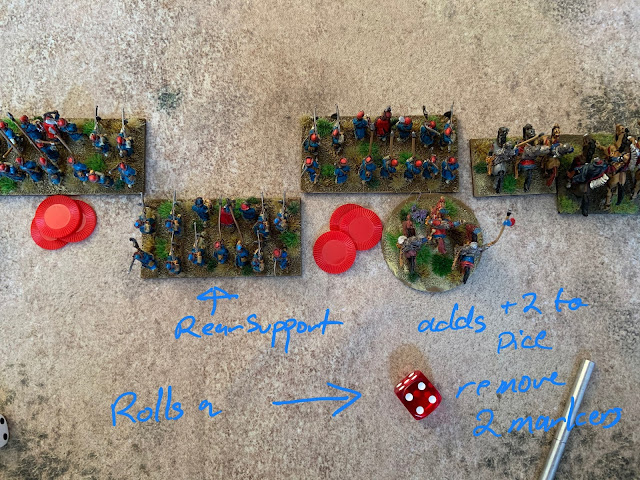 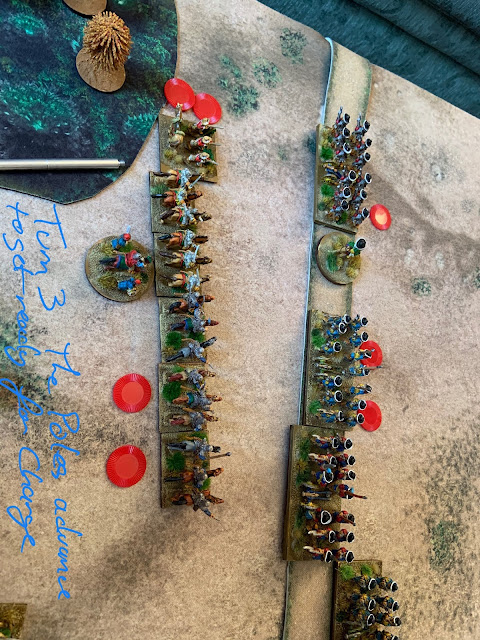 The Winged Hussars line up for a charge 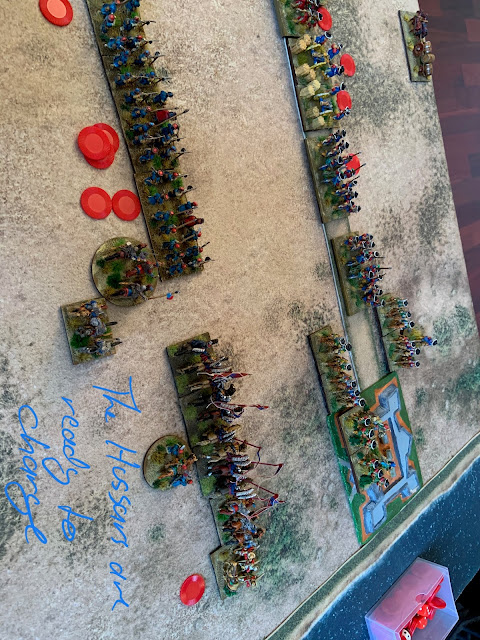 On the left flank, the German horse contact the wounded Bayonet Battle Unit 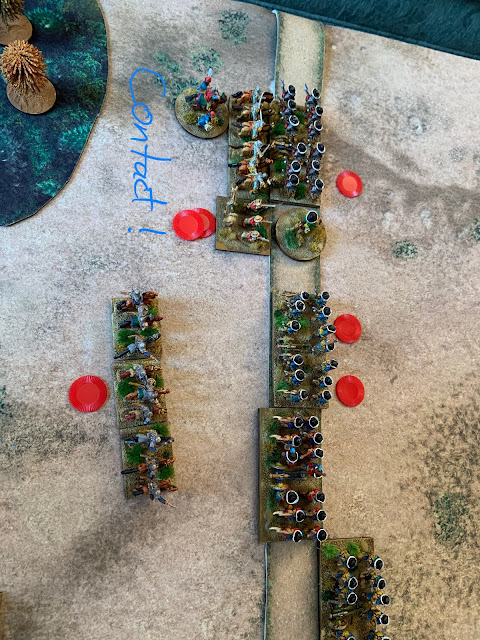 On the right hand side, the Winged Hussars contact.  Time to see what Elite Shock can do. 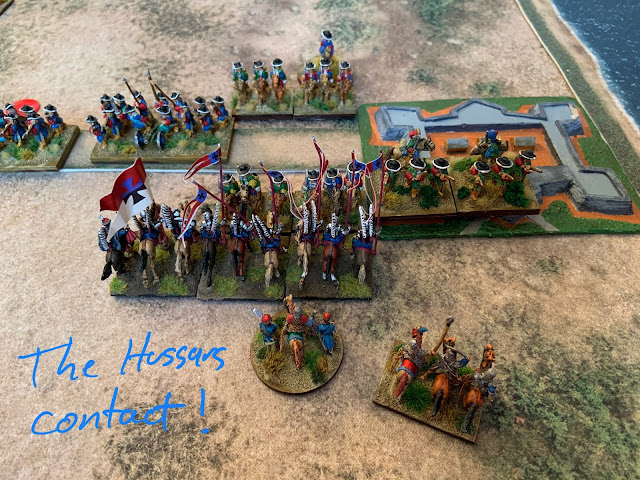 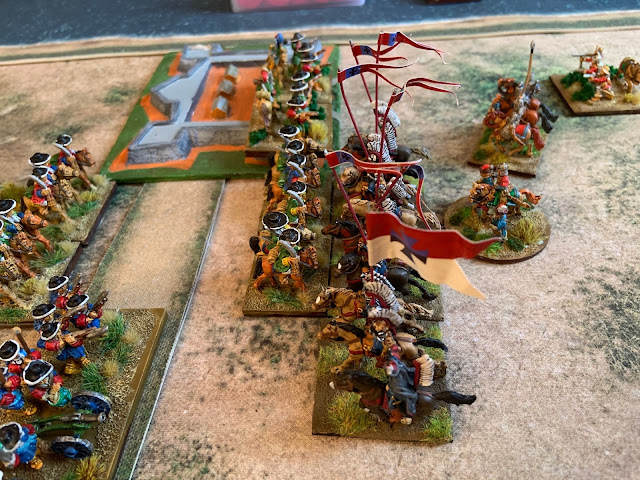 The Hussars break thru and must step forward due to being Shock.
One Hussar rolled a 1-6 and took two cohesion markers 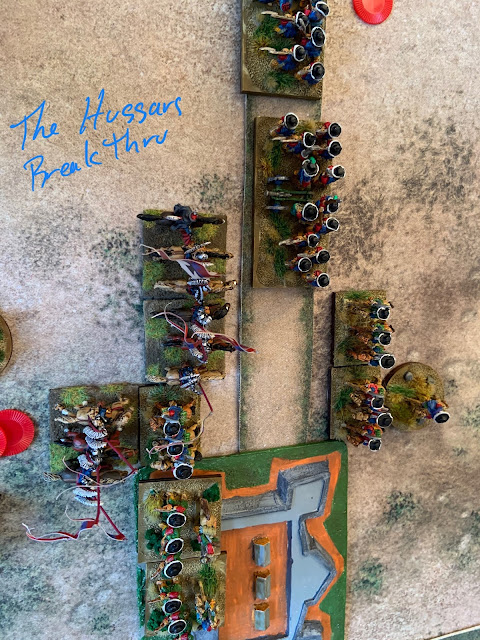 On the left flank, the German mounted broke the Bayonet Battle Unit in one turn and we now have the first breakthru. 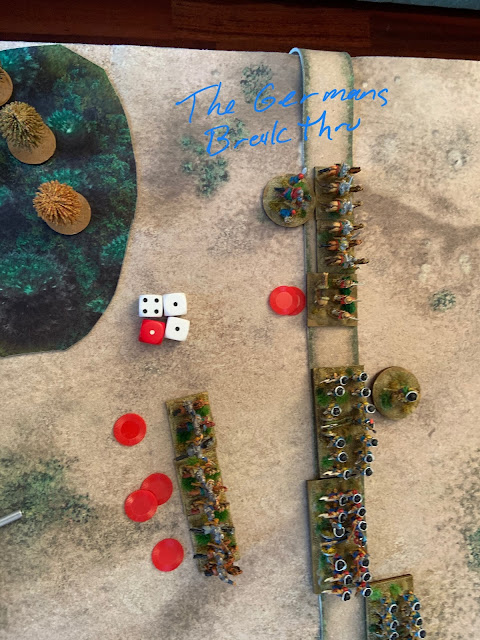 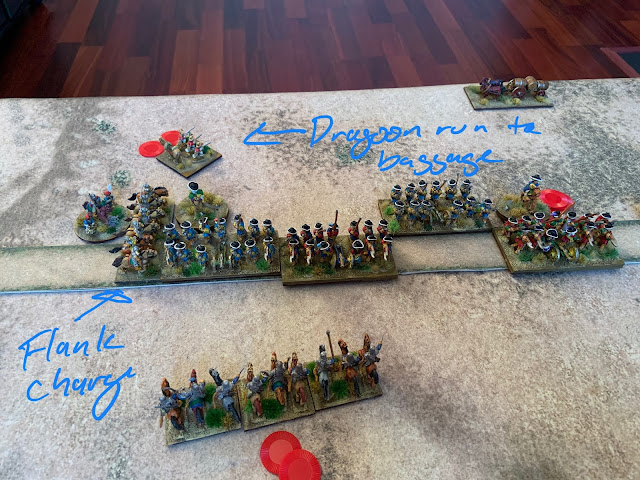 This doesn't bode well (the Poles roll a 6 on the dice)
The factors:
German Mounted
Cav vs flank of Heavy Infantry +1
Flank Attack +1
Support +1

LoA Factors:
0 as it was contacted on flank 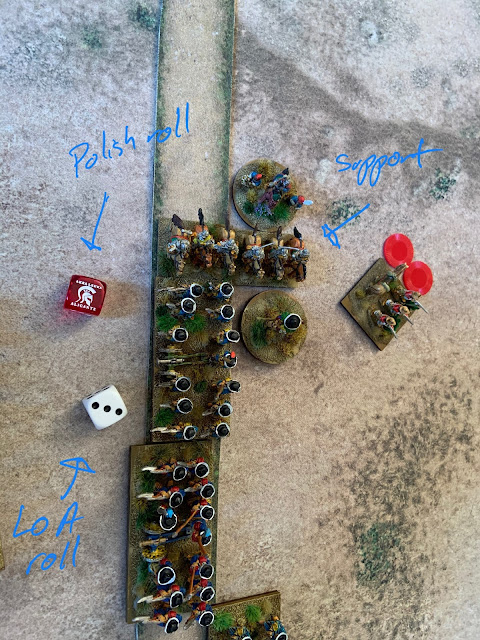 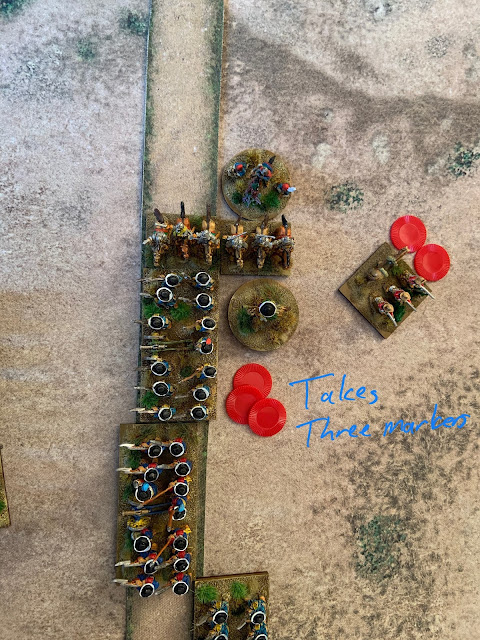 Turn 6
Its all over
The LoA P&S that was contacted on the flank in Turn 5 has now conformed.  It makes a 1/4 turn to face the German mounted who is on it's flank.

In Turn 6, a Polish Carbine mounted horse contacts it in the flank, this time causing it to take a cohesion marker 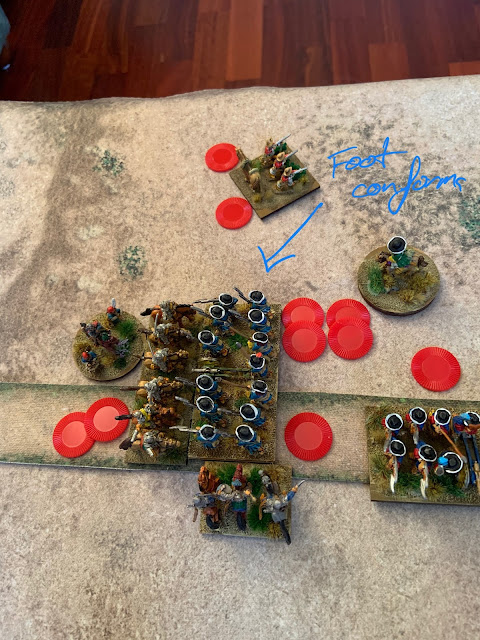 Nice Polish figures, do the poles work under these rules (ignoring the fact that the completely lost their Empire soon after this point in time)

So far they have worked quite well.

The Hussars are a lot more effective than when I've seen them in FoGR (my main other renaissance game).

I played a game a while ago of Poles vs Ottoman Turks and we had a really good game with the Turks shooting and evading and the Poles chasing them. Once the combat started, the Poles caused some serious carnage.